A Scouting Record for Kenilworth… 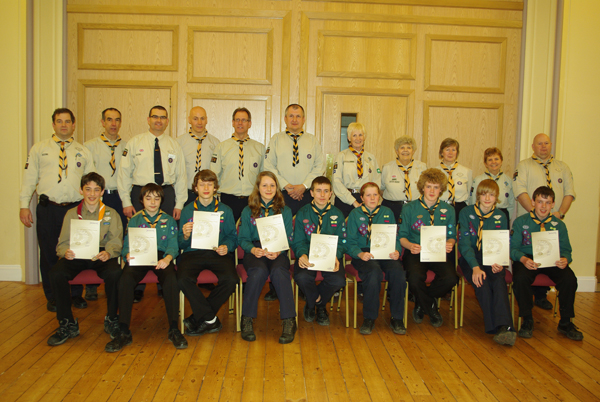 “The Chief Scouts Gold award is the highest achievement that a Scout can earn. This is a record for a single Group and both the Scouts and Leaders should be congratulated on their achievement” he said.

Scout Leader , Steve Sanday, said that the youngsters earned the award by consistent attendance at Scout meetings, contribution at camps and completion of numerous challenges throughout their Scouting lives.

Most of the Scouts had progressed through the ranks, being Beavers and Cubs with the Group, and their former Leaders were present to see them receive their awards. Nicky Schofield – Assistant Beaver Scout Leader – said “ it’s wonderful to see so many young people who started as Beavers aged 6 achieve their gold awards and it’s great to think that all the leaders have contributed to their success”

Amongst the 9 were 2 girls – the first ever from the Group to achieve this award. Rebecca said that she was “very happy” about it and Carla said it was a “really big thing”.

“I say that camps were the best!” Said Calumn – one of the 9 boys, Louis, agreed saying that he’d “done activities that he’d never been able to do otherwise” ..This was agreed by all the Gold achievers as some of the key things that Scouting had taught them.

Parents and grandparents were also at the presentation to mark the event and express their admiration of the youngsters’ achievement.

Nick Schofield - Group Scout Leader- said that the night was a milestone in the Group’s history. “it’s the result of many years of Scouting work by both the youngsters and their Leaders and shows what youngsters in Kenilworth can achieve of their free will. They should all be very proud of what they have achieved,”

It is hoped that all the Scouts will move on to Explorer Scouts where they may go on to achieve the Queens Scout award.

Picture above: The 9 Scouts and their very proud leaders of the 4th Kenilworth Scout Group.